Originally intended to be only a graphic novel, Trophy Girls  will now be released as a series.

While writing the Trophy Girls issue 2 I found that six pages were chronologically inaccurate and didn’t belong. Instead these six pages (or prequel as I call it) belonged at the beginning of Trophy Girls. Unlike the colorful and exciting  “Our Surreal Week”, the prequel is revelatory and melancholic. It’s a beautiful segue into the first story while offering a glimpse of dramatic events that have yet to unfold.

The art had to match the tone of the prequel, and so I decided on black and white. Judit Tondora, who illustrated the first story, suggested ink wash painting instead of standard inking. After seeing a few of her ink washed pages I knew this was the style I wanted. (If you Google “ink wash comics” you’ll see what I mean)

Below is page one of the prequel accompanied by Judit’s line art. There will be changes done to the narration however the artwork is final. Judit is currently ink washing the line art for all the pages. I will share the final look of page one as soon as it’s ready. (click on image to enlarge) 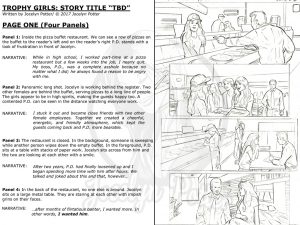 With six pages added, I now had twenty-two pages which is the standard for a single issue. I’ve begun the next, and probably most important, step of getting a logo designed for the Trophy Girls series. I’m thrilled to announce that Comicraft will be designing my title logo! They are the leader’s in lettering and graphic design work for the comic book industry.

I’ll be looking at portfolios soon in order to find a cover artist for the first issue. Everything is moving along and I couldn’t be more excited about how Trophy Girls is turning out!