On October 28th, 2016 Mark Pitta and I celebrated our six year wedding anniversary with a relaxing weekend in Savannah, Georgia. However, with Reno being blind and requiring insulin shots twice a day meant we couldn’t board him and Crystal wasn’t available that weekend to watch him. So Mark asked Kay Richards if she was available and wouldn’t you know it…of course she was!

She flew from San Francisco to Atlanta a few days before Mark and I left on our romantic getaway. We took advantage of those few days together by going sight seeing, having romantic dinners and I went to the spa while Mark visited an old friend who had moved there from Los Angeles. Meanwhile, back at home, Crystal and Kay attended a Halloween party at a friend’s house that weekend.

Mark and I came home Sunday, October 30th and the next day was Halloween. While at work, Mark and Kay spent the entire day setting up the Halloween decorations. After giving numerous compliments, I headed into the master bedroom while Crystal went upstairs. I don’t remember falling asleep but I do remember hearing the doorbell ring every couple of minutes. A few hours later I awoke and headed towards the kitchen. Mark stopped me and eagerly began to show pictures of all the kids and their costumes. I remember smiling and being quite happy that his first Halloween in Georgia had gone well.

Crystal’s bedroom light was on so I went upstairs and found her sitting up in bed watching television. Joining her, I sat on the other side of the bed but about twenty-minutes later we could smell something delicious coming from the kitchen. Realizing we hadn’t eaten dinner we headed down the stairs and saw Mark in the kitchen making two bowels of pasta. Crystal and I, in a playful voice, asked him “What are you making us for dinner?”.

No response. Just a stone cold face, and the clanging of him putting dishes in the sink. He didn’t care that we were joking around about dinner. And in the back of my mind I kept asking myself, “What have I done now?! Why is he so angry?!”. I could see Kay in the master bedroom, with the lights out except for a glare coming from the television and I knew both she and Mark were about to watch a movie. As Mark left the kitchen with two pasta dishes and a bottle of wine in hand, I said in a loud voice, “You don’t have to be such a dick!”. I didn’t scream it, but I made damn sure he heard it.

He closed the bedroom door. I went to follow but Crystal grabbed my arm and said, “Just let it go, ok.”. I calmed down and made us both an egg sandwich. As we were leaving the kitchen I could see Reno standing in front of the master bedroom door. I knew he wanted  to lay on his bed. So I walked over, opened the door and said, “Reno wanted inside.”

I went back upstairs to join Crystal but no sooner was there stomping coming up the stairs. In charges Mark, right towards me only to stop within an inch of my face. His scolding voice echoed throughout the house, calling me every terrible name you can think of, yes even calling me the “C” word. Paralyzed with fear, I remained quiet but from the corner of my eye I could see Crystal was terrified. He then grabbed two remote controls that were next to me on the bed and threw them. I barely dodged the remotes and they wound up hitting the wall, leaving some cracks and a small hole. After storming out of the room, Crystal and I immediately turned out the lights and tried to go to sleep. My only hope was that maybe Kay would calm Mark down and get him to apologize…but that never happened.

Mark stayed in his man-cave while Kay slept in another spare bedroom upstairs. I left for work but kept replaying the events from last night, trying to figure out where I went wrong. That day Kay flew back home and Mark Pitta would be gone for 3 weeks the next. Therefore, in my delusional mind I thought I’d have this one night with Mark where we could talk things out but instead he never came home. He and Kay took a car service to the airport where he got himself a room at a nearby hotel for the night.

Devastated and confused, I began checking Mark’s emails. I’d hoped to find out just what in the hell was going on. The first email was sent the day he left for the cruise ship which you can read below. 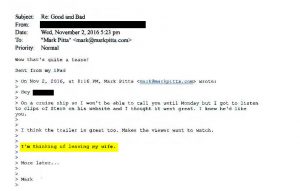 When I read that last line, my heart sank and I didn’t want to believe it. In all the years we’d been together and through all of his abuse, not once did I ever think about leaving him. I was in this marriage for the long-haul and had no intention of giving up…until I read the following two messages he’d sent via his Facebook account. 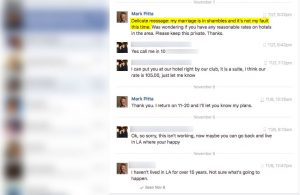 I felt betrayed, disgusted, and most of all heartbroken just knowing Mark wanted to leave me. The following day I found his wedding ring shoved in the back of his bedside table. Through all the fights and times of abandonment, not once did he ever remove his wedding ring but now, he’d broken my trust in him. Recognizing that our marriage was undoubtedly over, I gave myself a few days to decide what to do.

In that time I read the following correspondence between Mark Pitta and Kay on Facebook. (I have no comment on this because it speaks for itself) 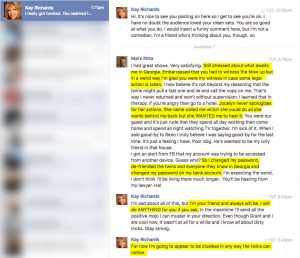 I had to make the first step in freeing myself from Mark Pitta and our destructive marriage. Otherwise I was certain I’d forgive him and allow the vicious abuse to continue. I remember crying over the phone while making an appointment for a consultation with a divorce attorney. I cried during the consultation, doing my best to explain the situation. She must’ve sensed my hesitation and confusion because before leaving, she said to me (something along these lines) “Listen, whether or not you retain my services is up to you. However, I really think you should read this.” She then handed me 9 stapled pages titled 20 Diversion Tactics Angry Manipulative Narcissists, Sociopaths And Psychopaths Use To Silence You.

I sat in the parking lot, skimming through the pages with a new realization. For each of the 20 examples given, Mark Pitta had used them at some point in our marriage. Well, no more! Never again would I be subjected to his mental, physical, and verbal abuse! Because on November 15th, 2016 I filed for divorce and had him served on November 20th at the airport upon his return.

The entire time he was away, not once did I attempt to contact him. Although he did email me twice just before coming back. You can read those emails below by clicking on the image. (and remember he doesn’t know I’ve already filed for divorce)

After he was served, I wouldn’t take his calls or answer his emails. You can read the last of what I call ‘melancholy’ Mark’s email below.

Even though Mark Pitta was allowed to stay at the house, he could have the upstairs all to himself,  he decided to flee instead. (I don’t know where he is or what he’s doing and frankly I don’t care)

It hasn’t been easy recovering from a narcissistic, abusive, relationship but with each day I become a little stronger. By healing myself I can prepare to do the things I’ve always wanted to. The road ahead is long but the journey itself is not impossible. For anyone who is thinking of or has left an abusive relationship, you might be worried about your financial situation. If so, I encourage you to read this extremely helpful guide to financial recovery after leaving an abusive relationship.