Mark Pitta self-destructive behavior while under stress had cost him his job at KTVU (a Fox affiliate) in San Francisco. In 2001 the SF Gate reported:

Mark Pitta, co-host since March 1999 of KTVU’s popular “Mornings on 2,” left for what station spokesman Kenny Wardell called “an instant vacation” on Tuesday morning just after arriving on the set. KTVU attempts to reach him have been unsuccessful so far, and he has not reported back to work.

Flash forward to 2015 when Mark got into an argument with one of the employees at the 142 Throckmorton Theatre. The employee made a poster for Mark’s Tuesday Night Comedy show which was identical to one that I had created a few years earlier. Putting his foot down, Mark threatened to quit his Tuesday Night show which he ultimately did. Rather than admit it was his idea to quit he instead blamed me. Why? Because he was “defending me and my poster.”

Quitting the Throckmorton meant we could no longer afford to live in California so we had to sell the house and move. We sat down and made a list of the pro’s and con’s of moving to either Las Vegas or Atlanta. Vegas was closer but I didn’t have a job waiting for me there. In Atlanta I had full-time work and Mark would say, “For my job, all I need is an airport.”

Selling the house, on the other-hand was a nightmare. It remained on the market for 8 months and just as December was coming to an end, a young couple was keen to purchase it. Now, Mark had been away on a cruise for most of December but that didn’t stop him from sending me angry messages…even with the prospect of selling the house. See the message below 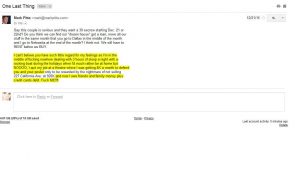 The next day he continued on with his abusive, ego driven, self-righteous messages and deliberately misrepresented my thoughts and feelings. See the correspondence below.(click to enlarge) 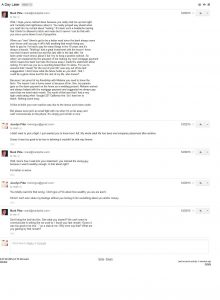 As if that wasn’t enough he even told me to leave the house before he got back from his cruise! You can read that correspondence right here (WARNING it contains abusive foul language)

Needless to say the house sold in January of 2016 and were on our way to Georgia. Maybe a change of scenery and  my having a full-time job would be the answer to getting our toxic marriage back on the track. And the Mark Pitta who once loved me unconditionally would return for good. Ridding us of the psychopathic monster who’d taken his place.