Mark Pitta is Jekyll and Hyde

Mark Pitta is Jekyll and Hyde

Even today, it’s embarrassing for me to admit that I spent the rest of my marriage walking on eggshells. I can count on one hand how many arguments Mark and I had where I knew what we were arguing about. Mark’s anger made him confrontational and I’m not one to fight. While getting attacked with his nonsensical accusations, I’d sit in silence, listening. This was my way of understanding and processing all he was saying to me. But he took my silence as me being stand-offish which fueled his anger even more. And still I continued to wonder what in the hell just happened and what did I do to provoke him.

He would leave the house and return very late in the evening, only to sleep upstairs on the couch. This could go on for days or sometimes a few weeks, making me afraid to go anywhere near him. He owned both cars so it’s not like I could just leave and drive away. Also, my “friends” were actually his friends so there was no one I could talk to. This made me his prisoner. And Mark had no problem taking advantage of this.

Emotionally exhausted, I was desperate for the loving Mark Pitta (I thought I’d married) to come back. So I began apologizing and taking the blame for whatever it was he was angry about. I lied to myself and made excuses for his erratic behavior. Denial hid the monster, that is, Mark Pitta from me and from reality. I realize now that he is responsible for all of those sudden mood swings and abusive verbal outbursts. Even though, he still claims to this day, that I am to blame for his actions.

Below is an email from Mark dated February 4th, 2012 and it is the perfect example of his toxic and abusive personality. (click on image to enlarge) 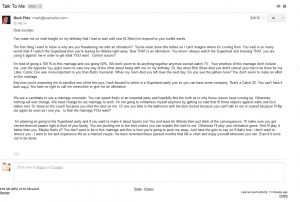