What would you do if your spouse left without saying a word and went missing for a week? Maybe you know but when Mark Pitta disappeared in September of 2011, I had nothing but questions. We’d been married for less than a year so how could he possibly abandon me like this?

I’ll start at the beginning. In August of 2011, Mark’s mother, Hazel Pitta, sadly passed away. Mark, his two older siblings, Kathy and Darryl, plus long-time family friend, Sue, decided to organize a memorial. Around the beginning of  September Mark and I drove to his mother’s house so that he, his siblings, and Sue could discuss the preparations necessary for the memorial. Now I knew Mark was still grieving, and I made sure I was there for him at all times. I’d cradle him whenever he began to cry or listen to his stories about his mother. However, what I didn’t know was the intense amount of anger he’d built up and it was on the verge of exploding inside him.

As Mark and his family began to talk about the memorial, I just sat and listened. I could tell the conversation was not going well and when we left, Mark was extremely unhappy. Or at least I thought he was…instead Mark had hit his boiling point but I wouldn’t know this until it was too late. The long drive back home was uncomfortable. Mark would periodically make mention of how insensitive his family had been and I would give him a sympathetic reply. We must’ve been less than 10 minutes from the house when a woman cut Mark off on the freeway causing him to fly into an uncontrollable rage.The more I tried to calm him down the angrier he became and soon I became his verbal punching bag.

When we got home I knew it was best to stay out of Mark’s way so I took Reno for a walk. When I returned, Mark and his car were gone. That night I went to bed early. I still believed he would return while I was asleep and he’d be next to me come morning.

He didn’t return the next day or the day after that plus I hadn’t heard from him nor. His phone was off and he wasn’t replying to my emails. That Tuesday, I went to the 142 Throckmoton Theatre where he did his weekly show and waited for his. He never appeared. Lucy Mercer, who runs the theater, said she’d let me know if he turned up. I was still new to Mill Valley and didn’t have any friends of my own. So I kept to myself as I tried to figure out what to do. I drove around Marin County going to the few hotels/motels I knew of in hopes that I’d see his car. No such luck. And with each passing day I was becoming drained and overwhelmed with sadness, fear and confusion.

By the end of the week I contacted his sister Kathy. We both decided to put out a missing persons report out on Mark. I contacted the police and an officer arrived to take down all the appropriate information. The following day I received a call from Kathy telling me that a letter had arrived from Mark. It appeared that Mark had voluntarily left and was no longer a missing person. She scanned and emailed me the handwritten letter so that I too could read it. I then sent it to the police as evidence. Below is the letter Mark Pitta wrote to his sister. (WARNING this letter contains profanity/explicit language)

Click the Next or Back button to turn page 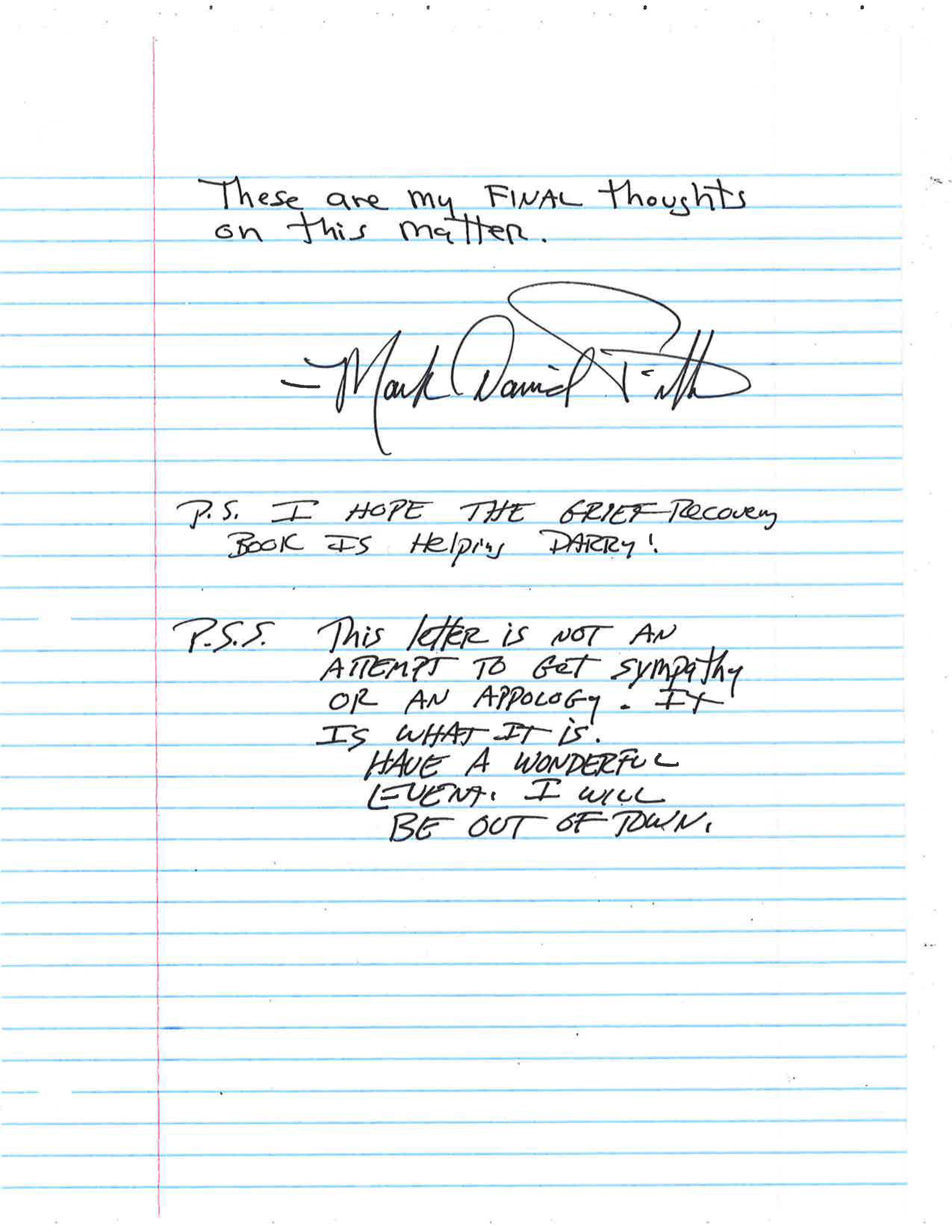 How did I feel reading this? At the time, I was relieved because he was still alive but now I this letter disgusting and inexcusable. But I was too naive to see the obvious signs of Mark Pitta’s mental instability, narcissism, and the verbal abuse he unleashed upon his own family.

That evening I heard a noise outside and went to investigate. An envelope had been placed under the windshield of the second car with my name on it. I recognized Mark’s handwriting. I looked around but didn’t see a trace of Mark or his car he was driving. My heart was pounding, I didn’t want to open it but I knew I had to. Below is Mark’s letter to me. (While his letter isn’t mean…his abandoning me was just another manifestation of abuse) 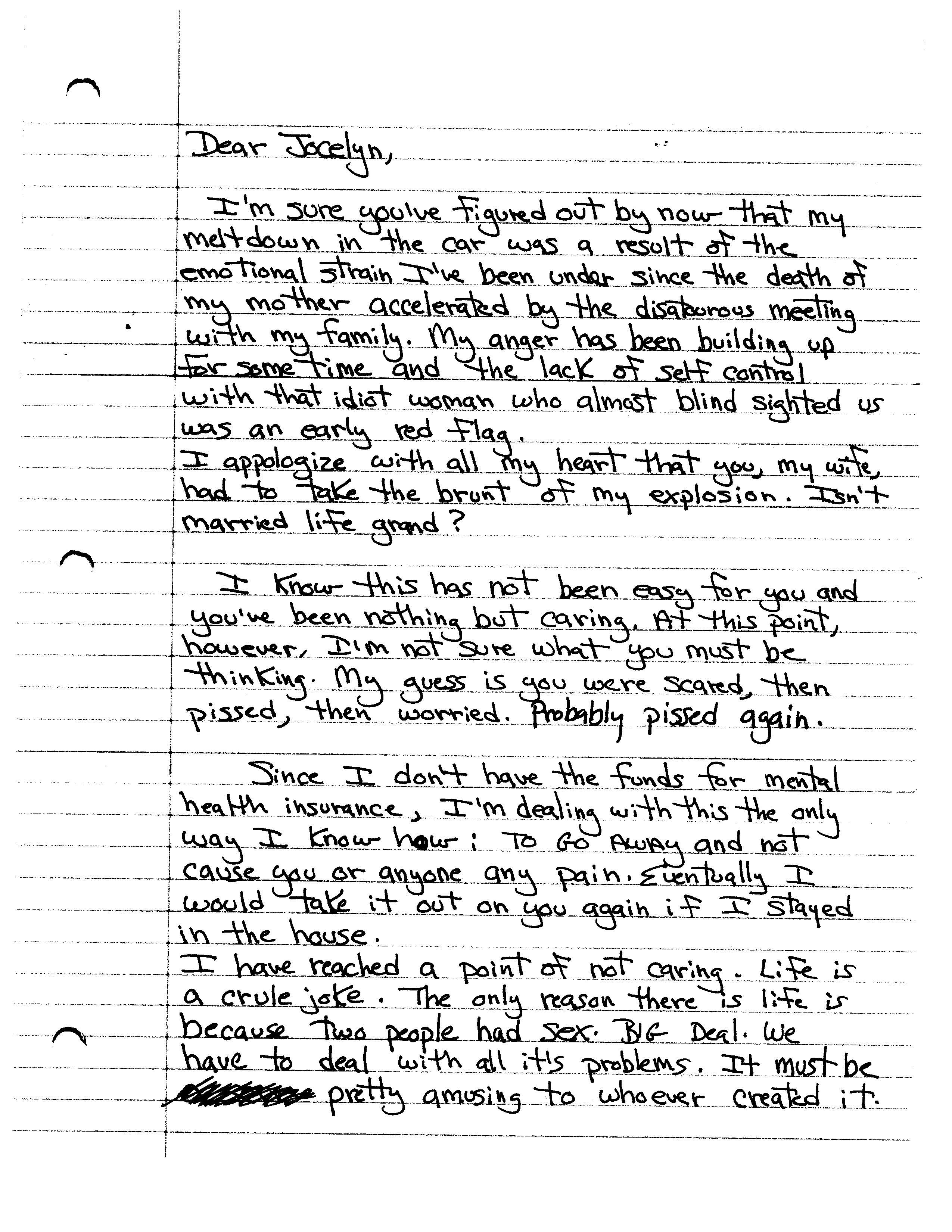 I couldn’t stand to know he was suffering and wouldn’t let me help him. I would be strong for us both. So I sent him the following email (please click the image below to enlarge)

I meant every word I said in that email and the following day he came home. I wasn’t mad at all, I was just so happy to have my husband home. Of course I’d forgive him… I’d unknowingly become a victim of his narcissistic abuse and couldn’t see the real Mark Pitta hidden behind his “false self”.

I wish I could say this was the last time Mark ever did this…but that only happens in fairy tales with happy endings. This nightmare, however, is just getting warmed up and will be one hell of a show.