The cover to Trophy Girls #3 is a tribute to the eccentric yet multi-talented, Michael Nesmith. He’s a musician, singer, songwriter, actor, producer, innovator and quite philosophical. Some of you may recognize him as a member of The Monkees, however he’s more than a “Wool Hat”. Don’t believe me? Firstly, he is considered a pioneer of country rock music. Secondly, he won the first ever Grammy Award for Video of The Year in 1982 for Elephant Parts. And above all, he sold his show PopClips to Warner/Amex who used it to form MTV!

It started with this email to David Campiti, CEO of Glass House Graphics

For the regular cover I was thinking of doing an homage to Michael Nesmith by parodying (or doing an updated rendition) of a scene from his video Cruisin’. It features two girls, Lucy and Ramona, who are rollerskating in various locations of LA.  Now I know the outfits are totally dated so we can change ’em up but I think it would be a fun concept and of course make it a bit sexier.

I love the establishing shot of the two girls rollerskating, having a great time, and the people watching them and totally getting into it. I also love the part where they skate past the HOLLYWOOD sign (which if we did that I would change “HOLLYWOOD” to read “TROPHY GIRLS”).

As a result, David replied with:

So funny! I’m a BIG Nesmith fan! I’ve only gotten to one Monkees concert, in 2011 in Tampa, and Nesmith wasn’t a part of it, sadly.
I have most, if not all, of his solo albums since then. Watched Elephant Parts and Television Parts when first broadcast. And yes, I have this song and remember this video. (I still think the song is missing a payoff final verse.)

As long as we can give it a way different feel from #2’s Queen theme with you and your sister on the sunny streets, this could make a cool cover…

After that the collaboration of the perfect tribute cover began! My rough idea for merging Nez’s suit with the outfits…

I think it’d be awesome to incorporate Nez’s infamous “Nudie Suit” look into the outfits. This is pretty much his
iconic suit that I’m certain you’ll recognize. He’s even updated it a bit in the past year or so for his tour he was doing with “The National
Band Redux”…

I looked at pics of roller skaters in the 70’s and 80’s and thought it actually looked pretty damn cool!

So maybe the roller skates can each be a color from Nez’s suit with wheels that are color complimentary. Like white and blue roller skates
with turquoise wheels.

Gotta have those thigh high/knee high skater socks!! Blue socks with a white band at the top and white socks with a blue band on the top.

I encourage everyone to visit Michael Nesmith’s website and explore all aspects of his career and accomplishments! 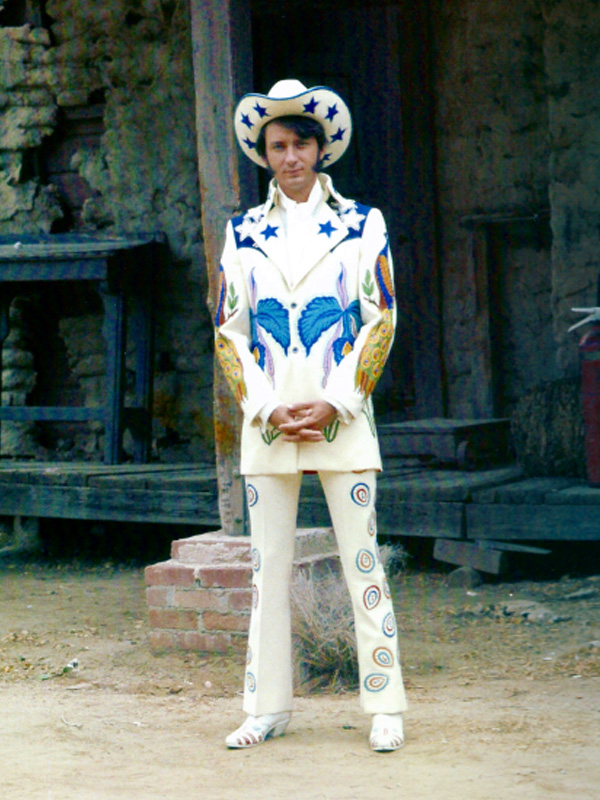 For the outfits it was important that we incorporated Michael Nesmith’s famous Nudie suit! 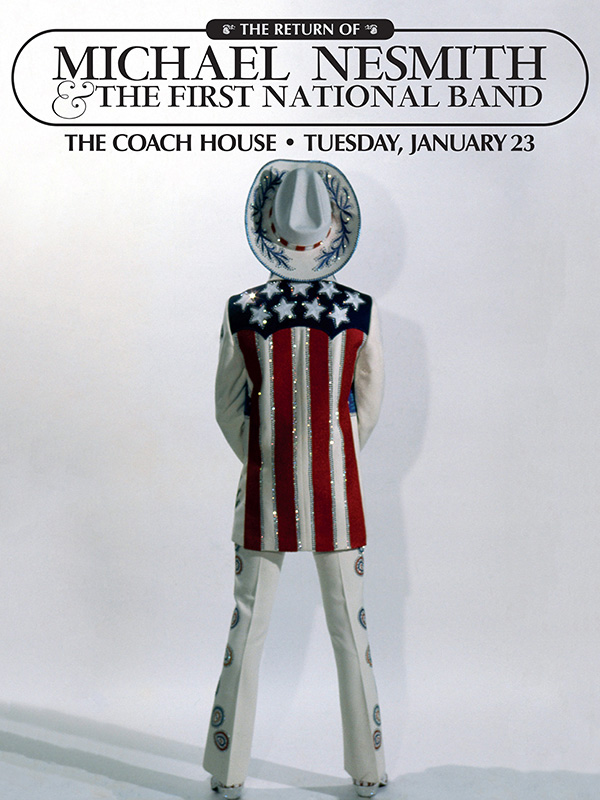 The back side of Nez’s iconic Nudie suit. 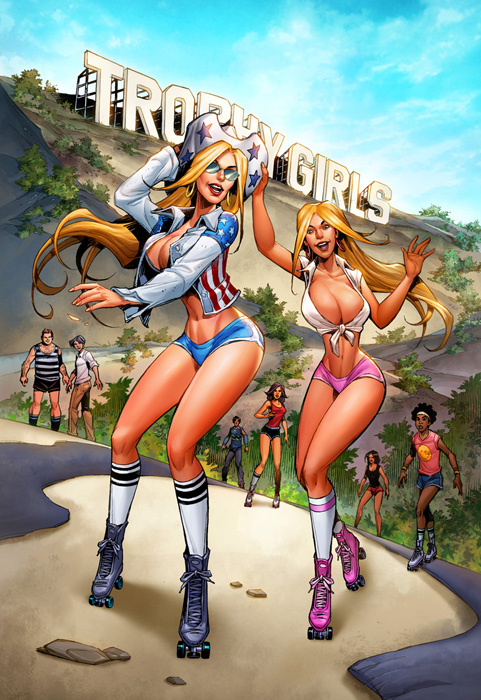 Once again Jinky Coronado and Sebastian Chang have designed a cover worthy of Great-Nez! (click image to enlarge) Similarly, the homage cover done for Trophy Girls issue #2 is our tribute to Queen. A band that changed our lives forever when, at 13 years old, we first saw their video for Bohemian Rhapsody.