Archangel’s Heirs Are The Apocalypse Twins

I smell a major crossover story line with the birth of Archangel’s heirs, which were finally shown in this month’s issue of Uncanny Avengers. They will be known as The Apocalypse Twins for obvious reasons. Here’s a quick recap for those of you who have no idea what’s going on.

It all started when Archangel bedded Pestilence in Uncanny X-Force #16 and left her pregnant with his child. 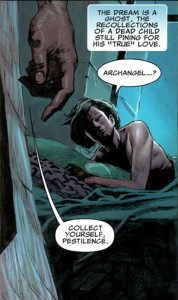 This child would become the new Apocalypse but Pestilence didn’t give birth to one child…she gave birth to twins named Uriel and Eimin.

Oh, did I mention Archangel is dead? Yeah, he’s dead.

So what happens now? I’m sure the internet is full of spoilers but I’d rather not know at this point. Archangel has always been one of my favorite characters. Maybe he’ll be resurrected through the current Angel who holds the Life Seed within him, has total amnesia, and is an absolute wimp. Either way it’ll be interesting to see how Uriel and Eimen turn out, both physically and psychologically.(at least for me anyways)