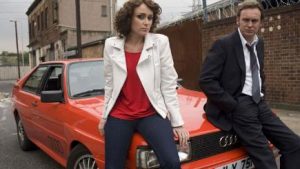 The series finale of Ashes to Ashes airs this coming Friday and I don’t know what I’m going to do. I haven’t been this excited about a television show since I was about 15 years old! When I first started watching Ashes to Ashes, I had never seen an episode of Life On Mars, so both Gene Hunt and Alex Drake were new to me. I’ll admit it took me about three episodes before I started thinking, “Alright I like this show and I love the chemistry between the lead characters. I want to know what happens next.”

Since I’m such a sucker for romance and a romanticist myself, I’m going to go through some of my favorite Gene Hunt and Alex Drake moments.

From episode 1. Alex puts her hand on Gene’s chest to feel that his heart is beating. Of course, Gene returns the favor by placing his hand on hers as well.

Gene: “Fandabbydozy. Now then Bollinger Knickers, you gonna kiss me or punch me?”

Gene and Alex are investigating a rape allegation from a prostitute. In this scene Alex says she’s a prostitute in order to enlighten Gene about his stereotypical thoughts on how prostitutes should look.
Alex: “So I’m not a HOOKER. But if I was, do you know something Gene? You could never, NEVER, afford me.”

Alex and Gene are stuck in an underground vault with no air coming in or out. Drake doesn’t believe she can die…not in that world…can she?

My all time favorite moment! When I first saw this my mouth just dropped! Gene is a knight in shining armor! Sigh…