I’m just about to wrap up my next pitch which features original story-line and characters created by me. I’m now having to take my 5 page pitch and condense it into one or two pages. It’s not easy but it’s great practice. I came across this very helpful article written by Mark Waid about Pitch Documents and wanted to share with you all.

When I talk to aspiring comics writers, they’re often most mystified not by the scripting (there are plenty of script books out there) or the language (most anyone who’s interested in doing this for a living already knows what a “panel” is, what “balloons” are, etc.). They’re freaking out because they don’t know where to start. Almost no comics editor will read a spec script cold; whether you’re angling to sell your own series or write for an existing property, you need to start with a Pitch, generally followed by a Proposal.

The Pitch is your first chance to demonstrate your understanding of the Economy Of Storytelling–that you know how to pace a comics story and have some clue as to how much fits on the page. And no editor will have faith that you can squeeze a complete story into a hundred panels if you can’t squeeze your idea into two pages.

True story: back when I was on staff at DC, a well-meaning but green freelancer sent me his pitch for his creator-owned series. It was sixty-two pages long. Worse, because this writer was friends with my boss, I was forced to actually suffer through this paper cinderblock, and it was arguably the most miserable experience with fiction I’ve had to this day. I would honestly, truly rather read Moby Dick backwards than crawl through a sixty-two page document that was sixty-one pages too long, and even if it had been filled to the brim with moments of staggering brilliance that would humble Jack Kirby and Alan Moore, I still would never have been interested in seeing it published because I had zero confidence that the writer could demonstrate any sense of economy in his storytelling.

The Pitch isn’t about story so much as it is about testing the waters (oh, how clever a metaphor that will appear to be in a moment). A Pitch Document explains, in broad strokes, the characters and the story and the “feel” of it all. (Is it drama? Comedy? Crime? Romance?) Not too much detail is necessary at this point; all you’re really trying to do is gauge the interest of whoever’s reading it.

Make it enticing, show confidence, and for the love of Murphy, keep it short. By way of an example, here’s a write-up (done with artist Mike Wieringo and, sadly, declined) that I worked up a few years ago when I was asked to pitch for Aquaman. It is not a perfect example of a Pitch Document if what you’re pitching is your own concept–this document builds on preexisting knowledge of who Aquaman is, basically, and what he can do–but read it for form and feel.

I am so sick of people making fun of Aquaman that I’m beginning to take it personally. For the last ten years or so, the way we’ve been scrambling to combat Aquaman’s “Dork of the Sea” image–and I’ve been guilty of trying this, too–is by making Aquaman increasingly darker, grittier, and tougher, the brooding, angry king beset with trouble. Each incarnation of the character seems grimmer than the last, to the point where all that’s left for us to do is give him two hooks. And a peg-leg.

Yes, the seas can be turbulent and stormy, but y’know what? Far more often, the ocean is a universal symbol for peace and contentment. It’s a calming influence. If it weren’t, Bermuda would be deserted and Hawaii would be an industrial trade port. It is most people’s “happy place.” Yes, the ocean is the set piece for “A Perfect Storm,” but it’s also the world of “Finding Nemo” and “The Little Mermaid.” I have never yet met anyone of any age who didn’t come away from Sea World envying the guides who swim with the whales and porpoises. I propose we turn this “grim Aquaman” paradigm around for a one-shot and see what happens. […]

There will be no mocking. NO jokes about how “dumb” talking to fish is. Anyone with a keyboard can make cynical jokes. That’s easy. What’s harder is reminding you why, when you were a kid, you thought the idea of living underwater or riding on the backs of whales WAS cool. We can do that. 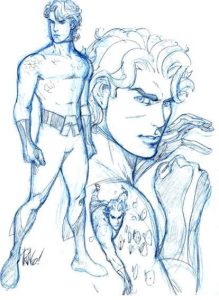 * * * * * *
That’s a sample Pitch Document. Breezy but with some personality to it. Not specific on story but strong on concept. Text broken up into chunks so it’s more inviting to read. Again, you’re just exploring an editor or publisher’s interest at this stage.

Sometimes it’s hard to remember the golden rule of “less is more”.  Oh and Marvel editors if you’re out there…let me save Psylocke’s origin!