I think it’s hilarious that you want me to have a surgeon cut my balls instead of using a condom. -Mark Pitta

In my previous post I shared a belligerent letter from Mark stating that I was to leave the house or before he returned. Near the end of the letter he makes it clear that he will not have a vasectomy or  in his words “…cut into his balls.”.  This is just one example of Mark Pitta violent towards me.Many months prior I tried talking to him about the possibility of  having a vasectomy. We had NO plans of ever having children.  Plus, I’d been on birth control for two years and the side-effects were becoming noticeable.

However, you can’t have an adult conversation with a man who acts like a child and that’s exactly how he reacted to my suggestion. He acted as if I wanted to have him castrated and there was just no reasoning with him. So I dropped the subject and never spoke about it again but he obviously never forgot.

Continuing from that previous post…  I arrived in Atlanta and was still suffering from whatever sickness I had. Crystal took me to an Urgent Care and below is an image of me checking in and updating everyone through Facebook.

As you can see, I really was sick. In fact I had acute bronchitis and acute laryngitis.

It seemed word had gotten back to Mark about my visit to the doctor. Instead of a sympathetic text message from him, I received the opposite. Turns out, he was in LA and lied to everyone about me being in Mill Valley watching our pets. He didn’t want anyone knowing about our fight but now the truth had come out. Forcing him to explain to all of his friends why he had lied in the first place.

I didn’t respond to his text message because I knew I’d done nothing wrong. If anything, it proved that I really was sick starting on the day of his nephew’s wedding and two weeks later I got an email from him which you can read below. 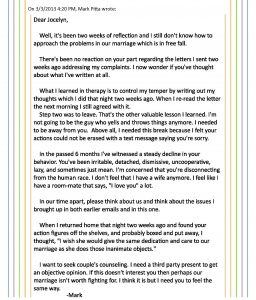 Mark Pitta is a classic narcissist,never apologizing for his behavior or holding himself accountable for them.Yet, I still loved him and allowed him to blame everything on me. So now it’s me having to justify my actions to Mark because I was in the wrong! He’d succeeded in manipulating the situation to the point of me believing I was the one who needed help. Think about this when reading the emails below 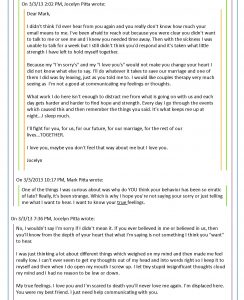 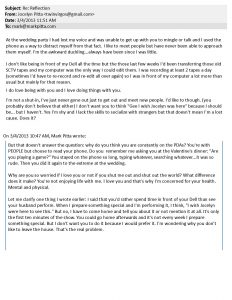 I remained in Atlanta for a few months until Mark was ready for me to come back. I didn’t see myself as a victim back then. My heart told me things would be better this time around. What a short lived fantasy that turned out to be.  Mark Pitta violent and abusive.