I have been married to Mark Pitta for six years. When I married him, I thought I was marrying a comedian. Instead I got “The Joker”. As my divorce is nearing the final stages I’m now left feeling heartbroken, violated, but worst of all ABUSED.

Being married to Mark Pitta was no laughing matter

Mark Pitta is not who he presents himself to be. Further more, he treated me in ways no man should treat his wife. Here’s a taste of the many letters, text messages, and emails I received throughout the course of our marriage.

Yes, love is blind to all destructiveness no matter what “love of your life” will say or do. (click the image to enlarge) 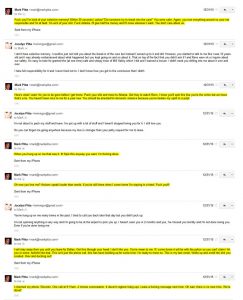 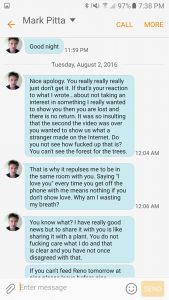 Consider the upcoming posts as a chronological diary of love and betrayal. Also, let it serve as guide to women all over the world that ABUSE comes in many forms. Mine may differ from yours but at the end of the day, it’s still ABUSE. You are not alone and it is possible to get out before it gets worse.

There are many places which help women in domestic violence situations. Yes, emotional, verbal, and psychological abuse is considered a form of domestic violence. It’s never too late to stop the violence and I encourage not only women but men, as well, who feel trapped and need to be free from their abuser.