Yesterday’s post got me thinking about Mark Pitta’s addiction to illegal prescriptions and his alcohol abuse. This slowly unfolded throughout our marriage and it was too late when I realized he had serious problems.

I remember after each show he’d let the audience know about him selling his CD’s in the lobby. The price for one was always “$20 or a couple of Vicodin.” And guess what? He’d always score Vicodin or whatever pain-killers an audience member had on them at the time.

This happened more often when he was doing an out of town gig because I would get the phone calls or text messages afterwards telling me that he either sold some CD’s or traded for pain-killers or a combination of both. I never praised him but I never gave him a stern talking to either. Deep down in my heart I’d hoped he would be a responsible adult and take them if his back pain or sciatica began to act up. However, his addiction to illegal prescriptions was growing worse.

I did ask him why was he taking these non-prescribed painkillers and drinking red wine along with them and he simply replied with “I love the way it makes me feel.” I pleaded and begged for him to stop but to no avail. He continued taking whatever pills were given to him regardless of the consequences.

“The Mexican Xanax kicked in but it wasn’t taking an edge off, it was putting one on.” – Mark Pitta

Moving to Georgia was supposed to be the beginning of a new chapter in our life. But for Mark it became more of a nightmare, and his only solution was turning to wine and pills. I was too busy with work to notice his new ways of getting a hold of non-prescription painkillers.

The first was by taking our sick dog Reno’s prescription of Tramadol. Never had it occurred to me that Mark would stoop so low as to deny Reno his prescription of pain medicine. I realized what was going on when I accidentally discovered an empty bottle of Reno’s Tramadol hidden in Mark’s office. As badly as wanted to confront him, I knew it was a battle I couldn’t win. (Mark Pitta is a man who believes he is NEVER wrong and everyone else is) So from then on I would be the one to fill Reno’s prescription and hide it from Mark.

Second was when a friend of his was sending him pills from California. I didn’t know about this until later when I found text messages left on his old iPhone. To this day I still don’t know what those pills were. Here is the text messages between him and his friend. (you’ll notice where I highlighted specific parts pertaining to the pills) (click image below to enlarge) 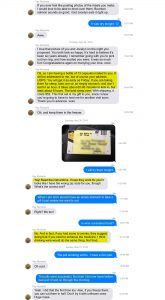 What better way to feed your addiction to illegal prescriptions.

As a cruise ship comedian, Mark Pitta not only travels to exotic destinations but he also has access to painkillers. Last November he was Mexico and when I read some correspondences between he and two friends, my heart sank. He hadn’t changed and now I feared for the people aboard the Holland America cruise ship. What Mark Pitta did to me back in 2005 he could easily do to any woman, especially if she doesn’t know his abusive history. It’s just a matter of time before Mark Pitta’s inner demon is unleashed aboard someone on a ship run by Royal Caribbean, Princess Cruises, or Holland America and all because he couldn’t stop mixing the pills and alcohol.  Below are the correspondences between him and two friends from last November, where he mentions buying some painkillers while in Mexico. (click the images below to enlarge) 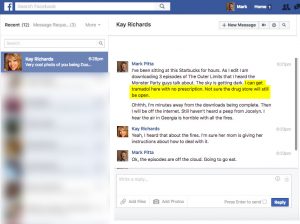 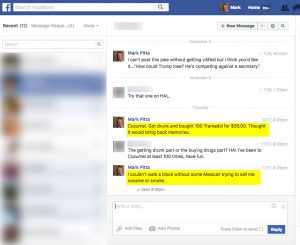