I Am a Writer…and a Scripter

In an earlier blog I’d mentioned moving to Atlanta to become a comic book writer.

I brought with me, a rather lengthy script for my first issue. I’m not embarrassed to say that it was not a proper script for a comic book. In fact it read very much like a Hollywood movie script. However, unlike the movie industry, there is no industry standard format for scripting a comic book.
One method is plot-art-dialogue, sometimes referred to as the “Marvel Method”, in which a writer presents the artist with a plot synopsis to work from. This gives the artist more control over the pacing and structure of the story. Then there’s the full-script method which is…well it’s exactly as it sounds. A script where the writer assumes all control over the story, pace, dialogue, etc. Full script is my preferred method and it’s how all four issues of The Deciders is written.

Enough with the history lesson already! What is your point?

My point? Hmmmm…I don’t have a point per say but more of an observation.

-FYI- There is a lot more to the story of how I got to this point…but I’ll share it another time!-

Below are a few pages of my script for issue one accompanied by the finished artwork. I thought it was perfect, from the pace of the story right down to the dialogue. However, when my artist,Kevin Stokes, handed back the finished pages…I quickly changed my tune.

I took one look at his pages and knew instantly that this driver MUST have more dialogue! His expressions are so animated and that I literally could hear him screaming at the twins!

However it was Syd who got the best one liners in the final version. This teddy bear is going to steal the show… 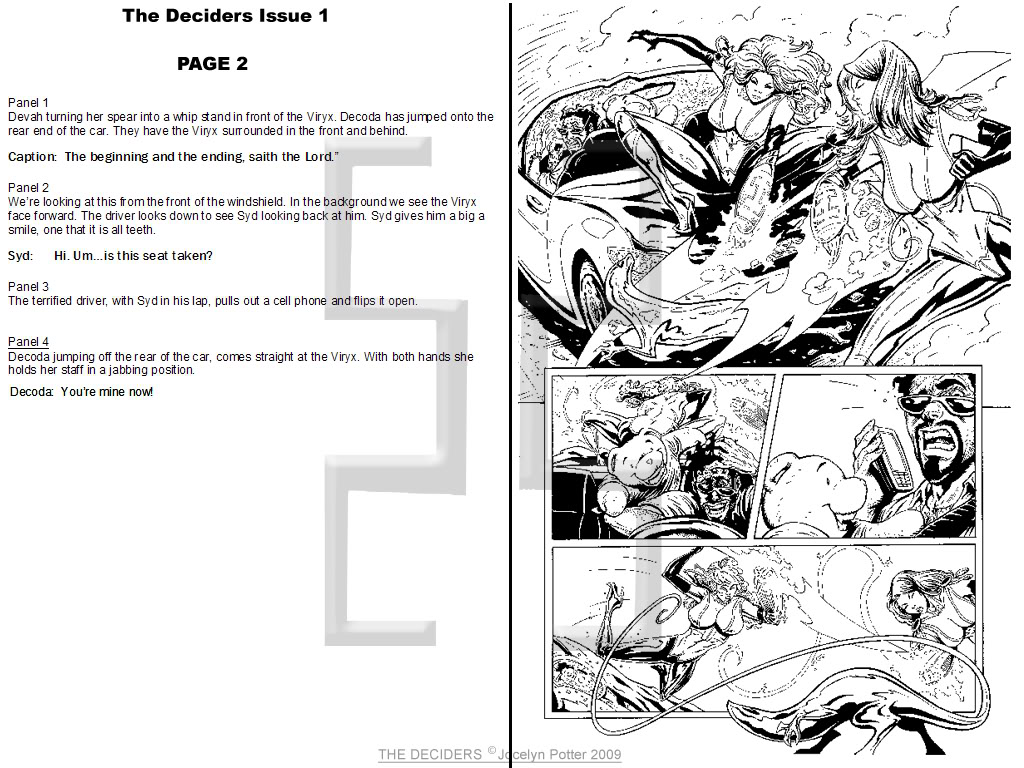 There were a lot more changes in dialogue and pacing by the time we got the first 5 pages finished for the preview issue. You can click here to see the other changes for yourself.

I realized that writing in full script meant I had all the control…but it certainly doesn’t mean there is no room for improvement by the artist.