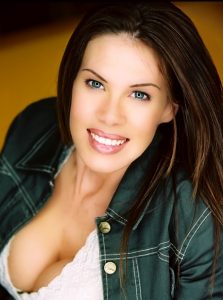 My name is Jocelyn Potter, just one half of the “Potter Twins”. Most people take one look at me and never guess that I’m a super-uber geek! I collect comics, trading cards, action figures and own a beautiful collection of Dragonball Z cels. So, don’t let my sexy looks fool you because “I was a GEEK before it was chic”!

Jocelyn was born in San Antonio, Texas, just two minutes after her identical twin Crystal. Her great-grandmother Hallie Stillwell (1897-1997) was a legendary West Texas pioneer. Due to being raised by a single father with a taste for Star Trek and British comedy, Jocelyn naturally gravitated towards the world of comics and sci-fi.

So following their creative passion, the twins embarked on a career inside the world of entertainment. These accomplishments range from developing a variety/comedy program for public television in Dallas, to an impressive career in the film industry in Los Angeles. She has also appeared with her twin in several films, television shows, and media outlets. With credits including Bare Wench: The Final Chapter (2005), The Mummy’s Kiss: 2nd Dynasty (2006), The Lusty Busty Babe-a-que (2008), and appearances on The Howard Stern Show, Discovery Channel, and Playboy.

Likewise, as a glamour and spokes-model, she represented various companies and organizations at significant events. The companies include Ampeg Amplifier at the 2003 NAMM Show and the renowned Rock ’n’ Roll Fantasy Camp.

Furthermore, Jocelyn has translated her creative ideas into viable and successful projects. She wrote a 5 issue mini-series, The Deciders, and the interactive eBook, Bible Versus: The Virgin Mary vs. God. Finally having found her inspiration she’s furthered her talent in writing scripts, web articles and several short stories.

Currently, she is collaborating with Crystal on their memoir titled Trophy Girls tapping into their professional and personal lives. This star-studded (no pun intended) autobiographical comic book series goes where no autobiography has gone before and does it twice as well.