Mark Pitta and I went from living in a house with two bedrooms to renting one with five bedrooms. We lived close to where I’d be working and there was more than enough space for our collectibles. Mark enjoyed having his own man-cave/home office. The house was so big that we invited Crystal to come and stay with us.
From the moment we arrived I immediately began work. I’d wake up around 6am (just as Mark was coming to bed) and I’d be home at 5pm or later. I’d hoped Mark would take the opportunity to explore the Atlanta area and connect with local comedians and comedy clubs. Those first few months appeared to be going well having gotten some gigs at the Punchline and a few other local shows. However, it wasn’t long before I started to notice a quick decline not only his mood but in his appearance.

Even with a new start it was the same old Mark Pitta.

He would get out of bed and take Reno (who was now completely blind and diabetic) to a nearby park, feed him and then go back to bed.  I’d come home for lunch and discovered that if he wasn’t asleep, he was drinking wine, watching old movies and smoking medical marijuana from a Zen Pen (which he’d had illegally sent to him from California).

Turns out his friend, Kay Richards, was also mailing him pills as mentioned in this earlier post. Click here to read their correspondence.
Working long hours made me so exhausted that I’d come home and immediately fall asleep. This also meant I couldn’t provide Mark the attention he constantly demanded from me. Therefore he turned to Kay for his narcissistic supply of love and empathy.

She’d always been infatuated with Mark and would do anything for him. Including, which bears repeating, the mailing of illegal drugs. Below are more of their correspondences via text messages. (hit the back and next button to scroll through the pages)

Again, I knew nothing of their conversations until after the divorce proceedings. And yet, it still hurt like hell reading them.

When Mark got a gig in Tahoe and Las Vegas from June until mid-July, I was elated. Not only would he be working but he’d have an opportunity to visit his friends back on the West Coast. He constantly updated me with phone calls and text massages about all that he was up to. Upon returning to Atlanta, he was revitalized and in high spirits. Telling me stories of his trip, even though he’d told me these same stories over the phone.

A week or so later, I awoke in the middle of the night and heard Crystal in the kitchen. I called her into the bedroom to have a quick talk about work before going back to sleep. Mark was upstairs in his man-cave but soon he was in the bedroom telling Crystal all about his trip. It was past midnight and I could see on her face that she really didn’t want to be there listening to him and I too just wanted to go back to sleep.

Mark didn’t care how late it was, how tired we were, or that Crystal and I both had to be up early for work. He grabbed his phone and played a video from his Vegas gig to Crystal. (A video he’d shown me several times already.) So in order to distract myself, I began surfing the web on my phone. I was also trying to shift Crystal’s attention away from him so that he’d leave us alone.

This sent Mark into a tirade about me being selfish and uncaring to which I replied with…nothing. I’d become too worn out to reciprocate. So after Crystal left the room and Mark’s verbal attacks had silenced, I fell back asleep. The following text messages reveal what transpired afterwards. I’ve highlighted a few examples of what I now call “Mark Pitta’s Classic Narcissistic Tactics”. 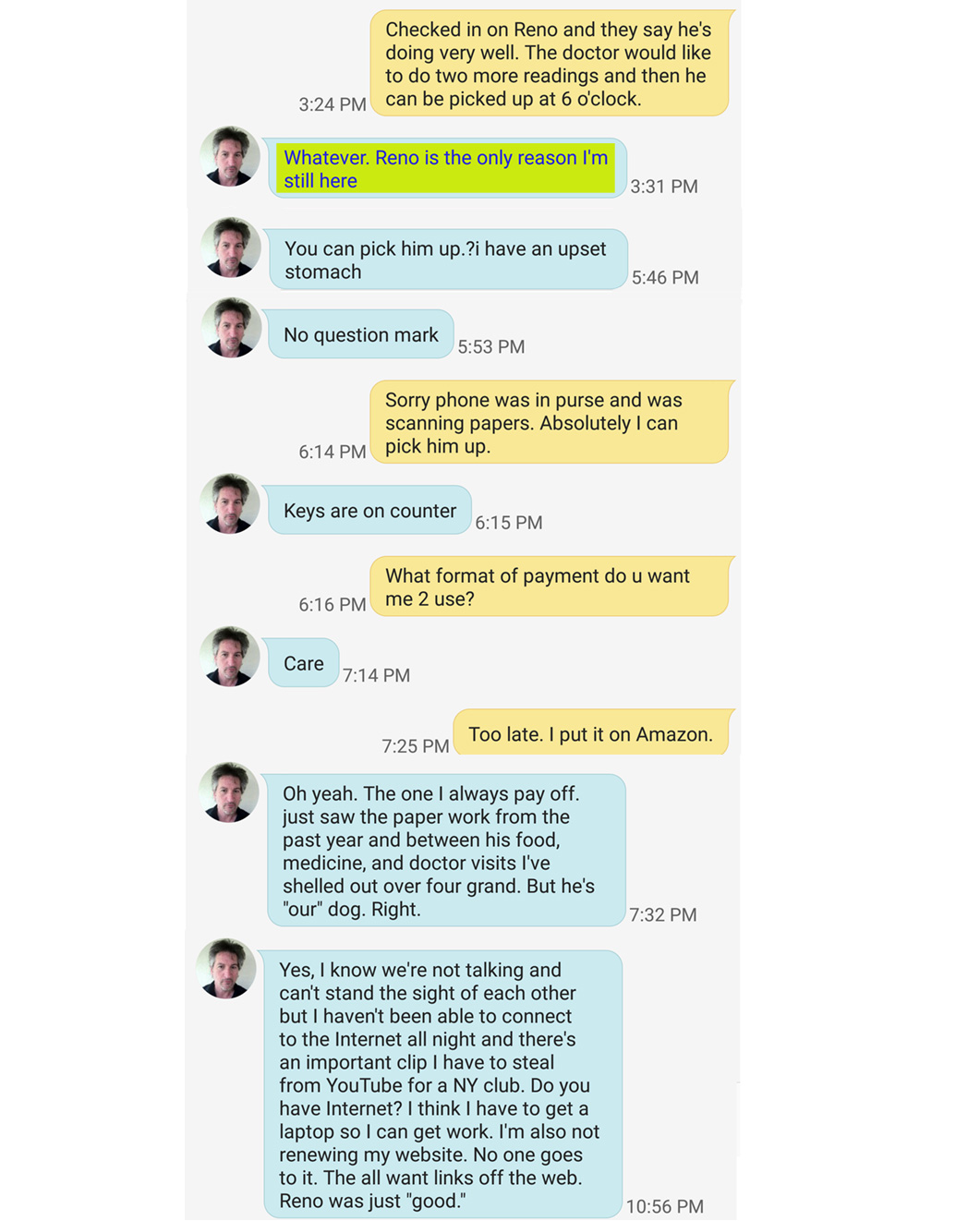 Juggling the responsibility of work and my narcissistic/bi-polar husband wasn’t easy. Focusing on work and Reno is what helped me  through each day. In the midst of Mark’s “silent treatment”, he left a letter on my pillow. Below is that letter (please note the “Vodka incident” is in regards to him drinking my Killer Queen Vodka that was extremely hard to get) 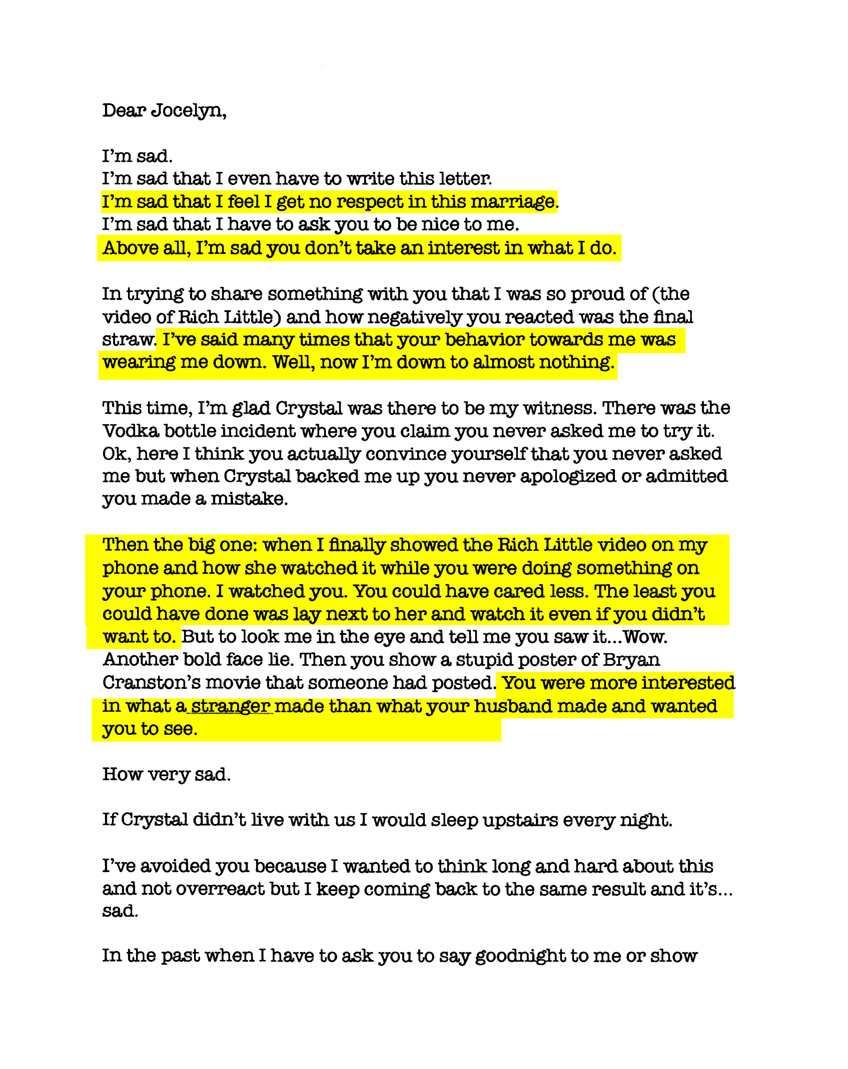 I was now becoming concerned about the situation and even about our marriage. I didn’t know what to do, so I went about each day just as before. Hoping and praying he’d snap out of it and come to his senses. Unfortunately, the text messages continued and he became much more verbally abusive in them. (WARNING the following images show explicit language) 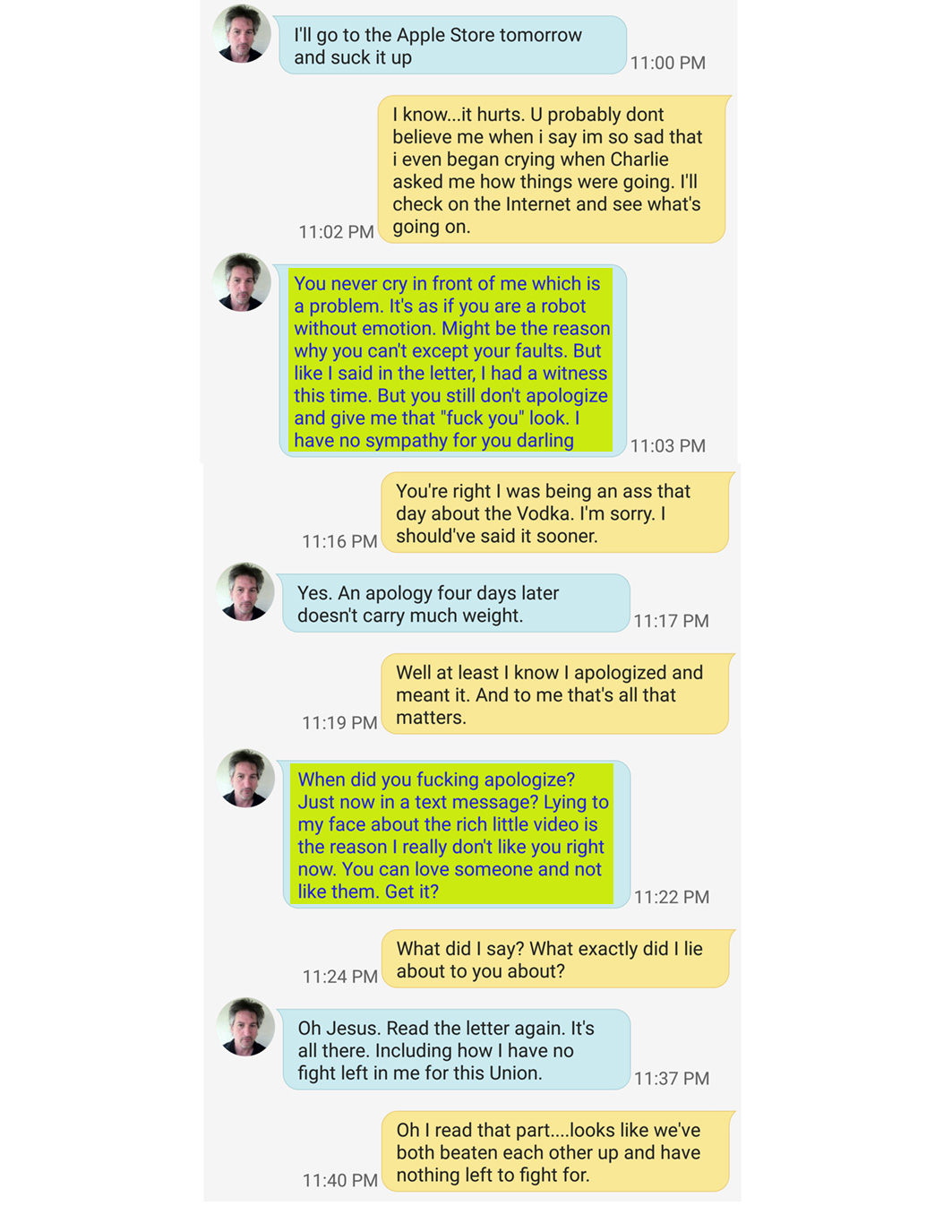 His last text message completely threw me off. He went from malicious and hurtful to sweet and thoughtful. Then continued on as if we’d never been fighting. I was relieved for the time being but little did I know that the end our marriage was only a few months away.